I realized getting a hold of me directly through the App Store was difficult, so if you have an issue with any of my apps in the App Store, please post here in the comments and I will get back to you, thanks.
at October 26, 2018 17 comments:

iPhone Simulator Zombies, how to destroy them

If you're on the same machine for years, and multiple versions of OSX and Xcode, likely you'll build up a large list of simulators that show when you want to select a simulator to run your app on.

As of Xcode 9 this became a breaking feature (at least for me).  Xcode had a hard time scrolling through the massive list, so searching online found a few solutions, and I just compiled them together here:

1) Remove yourself from iOS teams you no longer work on.

As far as I can tell this is a recent addition, as before you had to ask the team admin to remove you.

2) Remove the profiles from your machine (might as well nuke them all).

The path to do this is here (credit goes to Alex from the Houston iPhone Developer UG):

3) Remove all the simulators you no longer need, I'd say remove all of them then reinstall the ones you want.

Unfortunately there's no "Delete All" or select all feature.  You'll have to manually delete them 1 at a time. 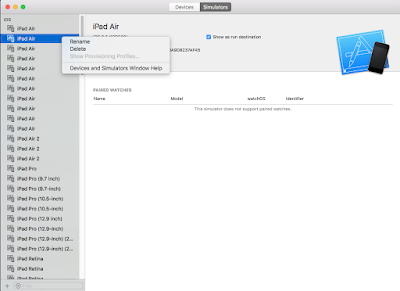 Or if you're extremely brave (I'm not) you can try this in the command line:

Credit goes to Joao from the Houston iPhone Developers UG:

I totally do not know if this will work, you've been warned :)

4) Add back the simulators along with their versions of iOS you want.

In the same Devices and Simulators page in Xcode at the bottom there is an add button: 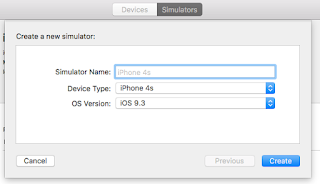 Now you should have a nice clean list of the simulators and the iOS versions to choose from: 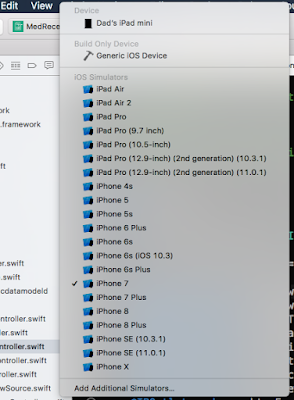 If you have customized code in your UITableViewCell subclass like myself, you usually have some

If you have customized code in your UITableViewCell subclass like myself, you usually have some startup code for the cell, usually setting some constraints, or colors of text, default placeholder, etc. It generally doesn't matter whether this code goes in awakeFromNib or layoutSubviews, as long as what you do after dequeueReusableCellWithIdentifier doesn't depend on logic in either of these startup methods.

In the case where it does, you need to know which one happens in which order, in my case I'm using a custom UITextView that has placeholder text, via a nice blog post on how to do that:

The issue was that when opening a form to fill out for a new document the text is empty, so you need placeholder text. On top of this I have a label that needs to show (alpha = 1) when text from the user is inputted. When no text exists in the TextView the label needs to animate away and the Placeholder text needs to appear.

I got in a bind because I couldn't figure out which of these 3 methods run in which order, in this case, print out to console obviously shows you.

Here's the 3 important parts of code:

(inside the UITableViewCell subclass)

In my case it was both.

Here's the order when printed out to the console:

Draw a red border around your UIView for debugging purposes

A lot of the times, you're dealing with UITextViews and UITextFields that have the same

A lot of the times, you're dealing with UITextViews and UITextFields that have the same white background and border as the superviews they sit on top of. It's helpful every now and then to make sure they're obeying the constraints you want them to have. In my case, I made a self-contained UITextView that has a placeholder functionality but the textView wasn't constraining to the size of its container view. Now add this extension to UIView

simply call it on the view (any UIView subclass) and see where the borders are landing. Quickly add a simple UIActivityIndicator to your screen

Sometimes you need to quickly throw a progress indicator over your view while something processes (hopefully in the background).

I've found this code to be useful for that situation. Apply to your needs.

I find myself using this a lot after a co-worker showed me. Basically, if you come across a directory path you need to get to, like to drop files into a folder or delete file, whatever, instead of manually clicking each directory to get to the destination, you can copy and paste the path into finder via 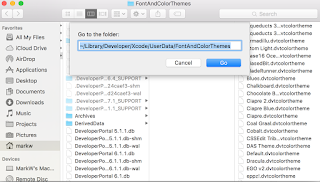 I realized getting a hold of me directly through the App Store was difficult, so if you have an issue with any of my apps in the App Store, ...